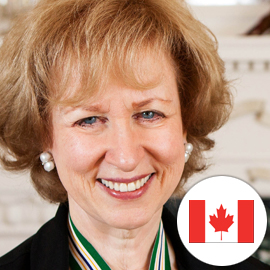 Kim was the first Canadian prime minister to hold office in all three levels of government: municipal, provincial and federal. Her extensive experience on the world stage includes participation in major international meetings such as the G-7, NATO and Commonwealth summits and the United Nations General Assembly. Kim has led a number of global organizations, including the Council of Women World Leaders, the International Women’s Forum and the Club of Madrid. With the Club of Madrid, the world’s largest forum of former democratic presidents and prime ministers, she was elected secretary general. Kim also is a member of the Global Leadership for Climate Action, where she is a champion for the environment while making strong business and economic cases for sustainability.